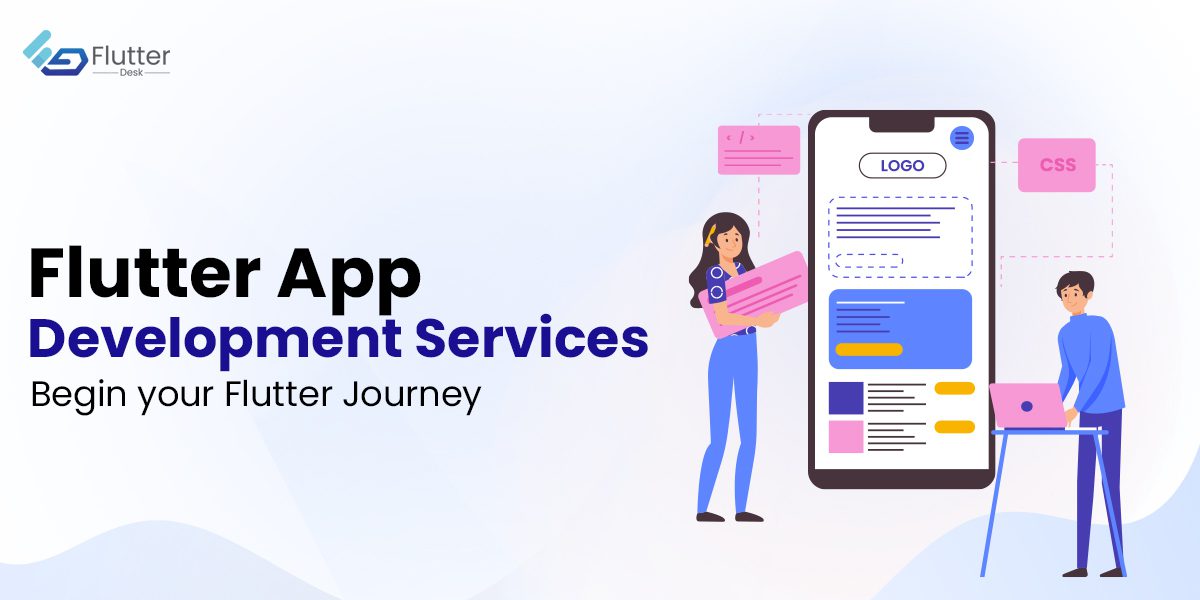 Mobile app development is growing rapidly, and with it, the need for a reliable programming tool has also grown a lot. A vast majority of apps built today are available on all platforms and this has been made possible with Flutter app development services. Almost 69% of the developers prefer Flutter when it comes to cross-platform app development. So naturally, this cross-platform has become a priority for both businesses and developers.

With its “write once, run anywhere” approach, Flutter is a time and cost-efficient option for everyone. Now instead of developing native applications one at a time, you can build high-quality multi-platform applications by using a single codebase. Furthermore, the hot reloading feature has significantly reduced the overall coding time for developers. Let’s have a detailed look at why Flutter app development has become so popular. We will also talk about how you can hire and take advantage of its services.

The number of applications on both Playstore (2.16 million) and App Store (1.85 million) has grown rapidly within a few years. The main reason is that every business and startup has recognized the undeniable need for a mobile application that can run on all platforms. And in today’s cut-throat competition, Flutter offers an affordable solution to this need. Additionally, the applications built with flutter are both visually appealing and functionally rich, while also delivering a native-like performance. Following are a few main reasons why Flutter is the most suitable option for app development services.

Let’s talk about cost-efficiency first. As mentioned earlier, Flutter offers multi-platform application development. This not only cuts the cost of operating resources but also reduces the timeline of app development to a huge extent. The feature of “hot reload” further allows a developer to check code updates in real-time, experiment, and make quick iterations easily without any long delay. This in turn leads to less testing time and quick time to market.

When it comes to performance, Flutter, unlike React Native, offers direct code compilation so you won’t experience any performance lags due to bridges. Recent research compared the performance of Xarmin, React Native, and Flutter. Flutter, launched in 220 ms with 58fps, came in first, the second and third being React Native and Xarmin respectively.

Allows you to Create User-friendly UI

Another advantage that Flutter has over React Native is that it allows you to create a visually attractive and user-friendly user interface. This is mainly because instead of relying on native system components, Flutter has its widget library. Widgets describe an app’s UI based on its state and configuration. A developer can use these ready-made widgets to easily create a layout.

Furthermore, these widgets perfectly follow Apple’s Cupertino looks and Android’s Material Design. At any level, you can also customize or create your widgets.

Since its release up till now, Flutter app development services have expanded to a great extent. Flutter was originally designed to create Android and iOS applications by using a single codebase. However, with its release in 2021, Flutter 2 enabled its users to build apps Windows and the web. Then came Flutter 3 in 2022, which offered stable support for macOS and Linux. So now Flutter cross-platform app development support has expanded to all six platforms – Android, iOS, macOS, Web, Windows, Linux, and Google Fuchsia.

The third release came with Material Design 3 support and Firebase integration improvements. Additionally, with the announcement of Flutter 3.3, it was revealed that Flutter will be shifting its rendering engine from Skia to Impeller. So with Flutter, you can expect even silkier animation. So what we can conclude here is that Google will be working effortlessly in expanding and improving Flutter for its users in response to the evolving market.

There is a small learning curve with Flutter, which is its programming language Dart. Learning dart itself is easy and the syntax might remind you of C++ and Java. This modern object-oriented language supports both weak and strong typing styles. So a beginner can catch the gist of it easily. So why did Google develop Dart for Flutter instead of using the already existing languages? Well, here are a few plus points about dart that make it a good option for Flutter developers:

AOT and JIT Compilation: A program that is compiled Ahead of Time loads up faster as it has already been converted into machine code. In Just in Time compilation, the source code is compiled during execution which allows great portability but a slow startup. Dart however combines the best of both allowing flutter developers to use AOT compilation during app release and JIT during development.

No XML File: An Android developer’s work is separated into code and layout as the layout has to be written in XML as Views that will later be referenced in Java code. But Dart keeps the code and layout in one place. Because, with flutter, everything is a widget and you can create the layout in Dart.

No Intermediate Bridges: As mentioned earlier, React Native makes use of JavaScript to communicate with native widgets which complicates the debugging process. But Dart on the other hand gets compiled directly into the native code, making flutter app development faster and more efficient.

How to Learn – Flutter’s Documentation

A great thing about Flutter is that it has a complete well-structured and detailed documentation of its own. This documentation does not just include documents but detailed video lectures from the Google team. Furthermore, you can also use practical exercises on Codelabs. So for a beginner, this official documentation will be enough. To get into the depth of Flutter app development services, you can take help from a plethora of courses available on Udemy, Coursera, and EdX.

Yes, there are a lot of flutter developers out there but hiring the right flutter team for your project is easier said than done. The best option for businesses is offshoring Flutter app development services. It is useful in terms of saving both the time and cost of app development.

Apart from the basic skills that every flutter developer has, here are some important aspects you must consider before hiring a team:

Now, let’s have a brief overview of agile methodology and how it can be helpful for your business.

In agile methodology, a project is broken down into different phases. The team channels through a procedure of consultation, planning, execution, and evaluation. This approach ensures a continuous collaboration between the client and the flutter team. There are four core values emphasized during this agile app development approach.

Agile methodology has become a popular approach for app development projects because of the flexibility it offers, along with client input and adaptability to change. Any updates and iterations throughout the lifecycle of your project can be best handled with agile project management.

Flutter’s skyrocketing surge doesn’t mean that it will soon be replacing Xarmin and React Native. But it is surely here to stay as a decent competitor which is evolving continuously. Hopefully, the above article cleared any queries you had about flutter and about hiring Flutter app development services.