What Makes Flutter Set A New Development Trend in 2023? 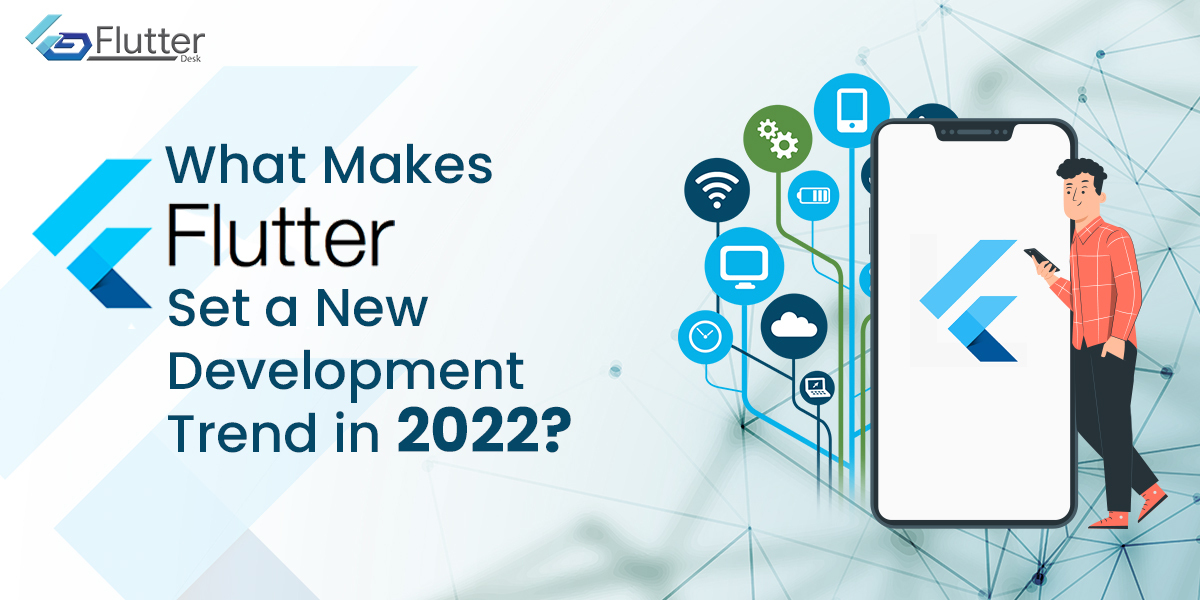 It is surprising to see the exponential increase in mobile apps available on app stores. This also makes the competition tough for enterprises and startups to stand out in the market. When it comes to developing an app, the first question that comes to mind is to figure out which reliable frameworks are present. Fast development process, optimal performance, cost-effectiveness, interactive UI/UX design, and easy development process are some of the major concerns of an app developer. These are responsible for Flutter to set a new development trend in 2023.

Now the question is how to find a reliable platform having all these perks for having an app built? Although there are plenty of frameworks present out there. Each framework has its pros and cons. But fortunately, Flutter changed the game by stepping into the field of app development and setting new trends in mobile app development.

Flutter has become the most common Mobile App Development Trends for building cross-platform apps. Moreover, the Flutter community is expanding quickly and increasingly now many top flutter app development companies across the world. It has gained almost 110,000 stars on GitHub until now. Likewise, Google has been providing continuous support for programmers via community platforms and regular updates.

There are many reasons for Flutter being the first choice of developers. Let’s discuss a few of them.

Reasons Why Flutter is the Future

Flutter has crossed all the barriers of complexity in code, difficult debugging, complex UI/UX designs, security inspection, etc. Now, you can build apps across platforms using a single codebase system. The introduction of hot reload helps programmers in many ways. Like to easily and quickly determine errors or liabilities in the code way before the coding process ends.

Flutter employs a simple and efficient development process. Which is the inner desire of the developers to step out of complicated programming infrastructure. Delivering the app in a shorter time will not be less than a surprise for your client. Even if you’re willing to run your own business, there will be more time saved to plan more insights and the future goals of your business.

Flutter benefits developers to natively build an app with minimum functionality so you can easily validate your business ideas. Its single codebase framework allows compatibility with both iOS and Android devices. There is no need to write the whole code again to move from one platform to the other. This will save resources and time. Which will result in easily and reliably estimating the capital cost or feasibility of your idea’s implementation.

It doesn’t matter if you are a growing agency or any startup, you can rely on the Flutter framework to validate your idea through MVP. As MVP requires minimal time and effort to build, flutter meets all the performance and functional aspects to deliver an ultimate experience.

According to many of the developers out there, apps developed with flutter have exceptional performance. Whether it is an iOS, Android app, or any desktop app. It is the only platform that matches the performance expectations of natively built apps. Flutter also offers many features that make the app more responsive and high-performing. One of them is managing memory. You can use Gradle in the case of the Android app. It has multiple configurations that help developers handle the app’s size.

Another way is using app bundles. These are efficient in the way that it only downloads the necessary code for a specific target device from Google Play Store. Google Play Store makes it possible as it repacks and ships only the necessary files and resources for the target device’s features. These features include screen resolution, platform architecture, supporting hardware features, and so on.

You will need to follow some of the performance enhancement techniques if your app isn’t performing as fast as you expected.

An interesting and most useful tool that has been introduced in Flutter is the hot reload feature. It allows the developer to actively test the code and also check if there is an issue with the logic or the language. In addition, you can see the real-time progress of your app using the “hot reload feature”. This increases productivity in the development process as you can’t miss out on any errors during the coding process.

When building apps using other frameworks, it requires a whole separate process to test the app. These tests are fertile efforts in front of Flutter. This is just because of the Hot Reload feature as it tests the code as it is written. This makes the development process more efficient and easy, reducing the time and cost of development.

With increased mobile app usage, the cost of app development took an exponential rise. It became difficult for businesses to decide whether it would be a sustainable choice to build an app or not.

Fortunately, there are platforms available that benefit clients in their respective ways. One of the most popular and cost-effective frameworks is Flutter. As discussed earlier, it is an open-source, single-codebase system facilitating time and cost reduction for the development of apps. Reduced time for testing, reduced efforts to rewrite code for other operating systems, interactive UI/UX designs are some of the salient features of flutter that make it a cost-effective platform to develop apps.

Flutter is a cross-platform single codebase framework that allows developers to natively build iOS, Android, web, or desktop apps. There is no need to rewrite the code for the separate operating system. Flutter is undoubtedly capable of dealing with different operating systems functionalities. This is one of the main reasons behind flutter setting development trends.

Flutter has made development smoother, user-friendly as well as easier to use. In mobile development, it can be used to build applications that work on both Android and iOS. This makes flutter set a new development trend in 2023.

Flutter has given rise to game development by introducing a commutable game engine that provides you ultimate gaming solutions. It leverages the powerful infrastructure provided by Flutter but also simplifies the code for you to build projects.

It provides you with a simple yet effective game loop implementation and the necessary functionalities for games. For instance; input, images, sprite sheets, animations, collision detection, and a component system that we call Flame Component System.

You can pick and choose whichever parts you want, as they are all independent and customizable.

Other utilities to make development easier

The entire mechanism of UI design in Flutter revolves around widgets. Widgets present the various stylistic, layout, and structural components of the UI, such as buttons, fonts, colors, menus, and forms. Widgets can also be modified and combined to form more complex elements. We can create custom widgets also.

Flutter has several responsive widgets available that help build a smooth UI/UX, appealing designs, and a reliable developing experience. As widgets drive the Flutter, you can also customize them according to your needs or desires. It facilitates the concept of creative freedom. More interestingly, you don’t need to make the widgets again and again. Developers can use the recent widgets to streamline the development process. This makes flutter set a new development trend in 2023.

This was pretty much it for Flutter’s benefits over other platforms. There are many other benefits also of choosing flutter over any other platform as it is about to set a new development trend in 2023. This is the reason why flutter has become the most valuable framework in the present time. I hope you have realized the potential of using Flutter. To hire flutter developers for developing any app contact us or leave a comment below if you have any suggestions to share. Cheers!

4 thoughts on “What Makes Flutter Set A New Development Trend in 2023?”