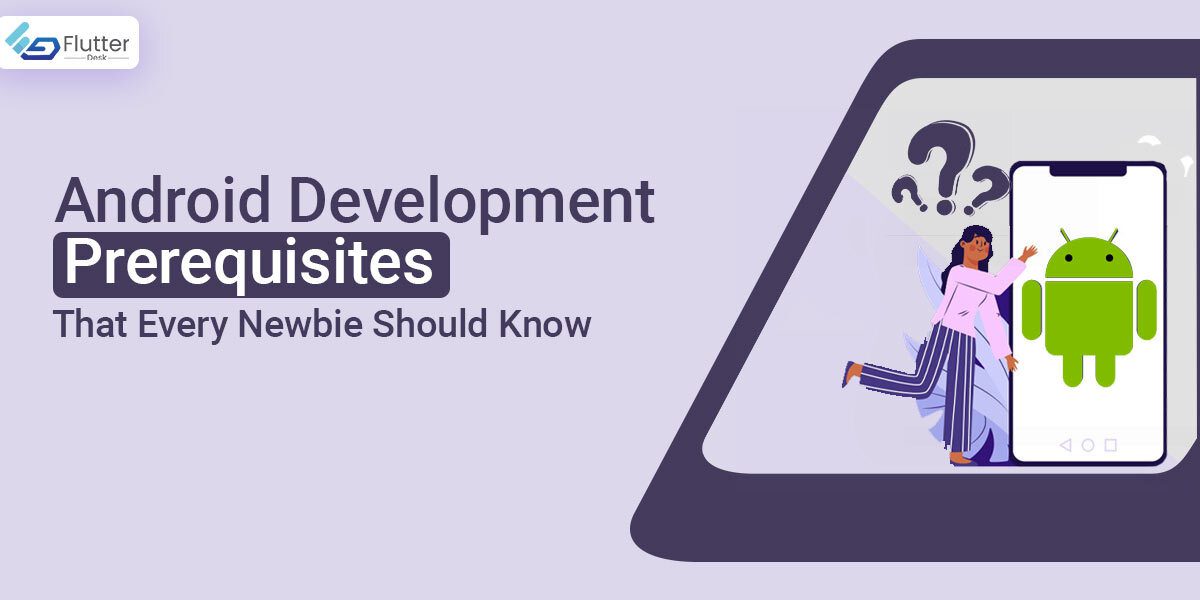 Mobile app development has been a hot topic in the recent few years. This is because of the increased user base of mobile phones. There is a massive potential for businesses to offer their products or services online through mobile apps. Going mobile with your business in the present era won’t be a wrong decision for any business until they do thorough research at first. This blog will cover Android development prerequisites that you must know before stepping into it.

These days, people have a keen desire and craze for learning Android development. Similarly, it is projecting strong competition in the market for developers to stand out. Moreover, there will be a definite increase in revenue as well because more apps will be available for users to use and spend their money on. Surprisingly, users spent around 48 billion dollars on apps in just the first quarter of 2021.

Moreover, if we dive deeper into the stats, users downloaded almost 111 billion apps in just the first three months of 2021. The majority of the apps were gaming followed by educational and business apps. This portrays the utmost potential of having a mobile app for your business in 2022 and so on.

What is Android Developer Mode?

The developer mode is an option in any Android device which allows you to configure the system’s behaviors that help you scale your app’s performance. You can simply enable USB debugging from the “developer options” menu on your Android phone’s settings. This allows your software development kit to communicate with your Android device over a USB connection. This way you can live test the app you’re building.

Let’s get to know some basic Android development prerequisites that are necessary for one to explore.

What are the prerequisites to learn Android development?

Recently, Android held a total share of 87% in the global smartphone market. The iOS smartphones contributed only 13%. This signifies the utmost potential of Android app development in the present era.

Before you think of being an Android app developer, it is necessary for you to have a basic knowledge of programming. Learn what’s programming, what are different programming languages and basically all about how mobile app programming works.

To learn any Android app development technology stack, you need to be aware of functions, variables, or methods. Alongside this, you also need to know the data structures like lists, arrays, hash trees, space partitioning, etc. So, make sure you come forward having considerable knowledge of programming to excel more quickly.

2. Get Familiar with Android Development Frameworks

There are a few Android development frameworks, namely Flutter, React Native, Xamarin, Apache Cardova, Ionic, etc. Whenever you’re thinking of going with a particular framework, this might be challenging for you. A couple of attributes justify a framework to be beneficial or a perfect fit for you. These attributes are the framework’s popularity, its cross-platform capability, developer friendliness, support, etc. If you find most of these attributes in a single framework, you can count it going for. Choose a development framework and start learning and practicing it as much as you can.

3. Strong Grip Over Java and Kotlin

Java and Kotlin are the most extensively used languages for Android app development. In fact, these two are must-have expertise for any Android developer. You may not get to use these languages on the front end but these are surely going to be used at the back end. Because the code you write in Dart or JavaScript needs to be compiled in Java or Kotlin at the back-end. So, don’t just go for a language that allows you limited functionality and expertise.

4. Get to Know the Layout of Android Applications

During the learning process, keep an eye on the layout of the Android applications as well. Android apps have a complex layout as compared to iOS apps. Dealing with Android development prerequisites, you need to take care of a few more things. There are several dedicated folders in an Android app to perform specific tasks. These folders have some built-in programmed files that have some pre-stored instructions and data. The instructions and data are in certain programming languages on which a development framework operates. So make sure that you are aware of the Android applications’ layout.

Several folders are already present in an Android app development project when you create one. Let’s discuss them one by one.

JAVA folder contains the source code that is responsible for performing several tasks within the app. This folder also handles the code for the app’s utility, storage, buttons, variables, popup messages, etc.

In the resource folder, there are UI strings, XML layouts, and images that are included in the Android application. The resources folder (often represented as “res”) contains multiple sub-folders like drawable, values, layout, mipmap, etc.

A drawable folder represents the media or the graphical approach used in an Android app. These files are in different forms i.e. jpg, png, gifs, etc.

The mipmap deals with the icons used inside an Android app. It allows you to place the buttons that are present on the home screen or any other screen within the app.

The Android manifest file contains information that is required to access data from another app. Moreover, it also helps declare the permissions that are necessary for an app to access information from another app. Despite all this, the Android manifest file also holds the app’s software and hardware features. It helps determine the compatibility of your app in the Play Store.

How Much Does an Android Developer Make?

Mobile app development is considered to be one of the high-paying skills in the present era. We are moving towards a totally mobile world where all the stuff will be done online. To some extent, we are living in that world already. Now, we don’t need to go to the walk-in stores and get the stuff we need. Rather, we can easily buy the stuff online from any popular e-commerce store shipping goods worldwide. So, there is a high potential for businesses to go mobile and serve the world through online platforms like mobile apps, websites, or e-commerce stores.

Learn how much Android app development costs to build an app from scratch.

Let’s break down the salary packages for Android developers based on their expertise level.

Lastly, we wish every Flutter aspirant to be successful in their learning careers. If you have any queries or suggestions, you can comment them down. Our team of highly skilled Flutter developers would love to be of help.