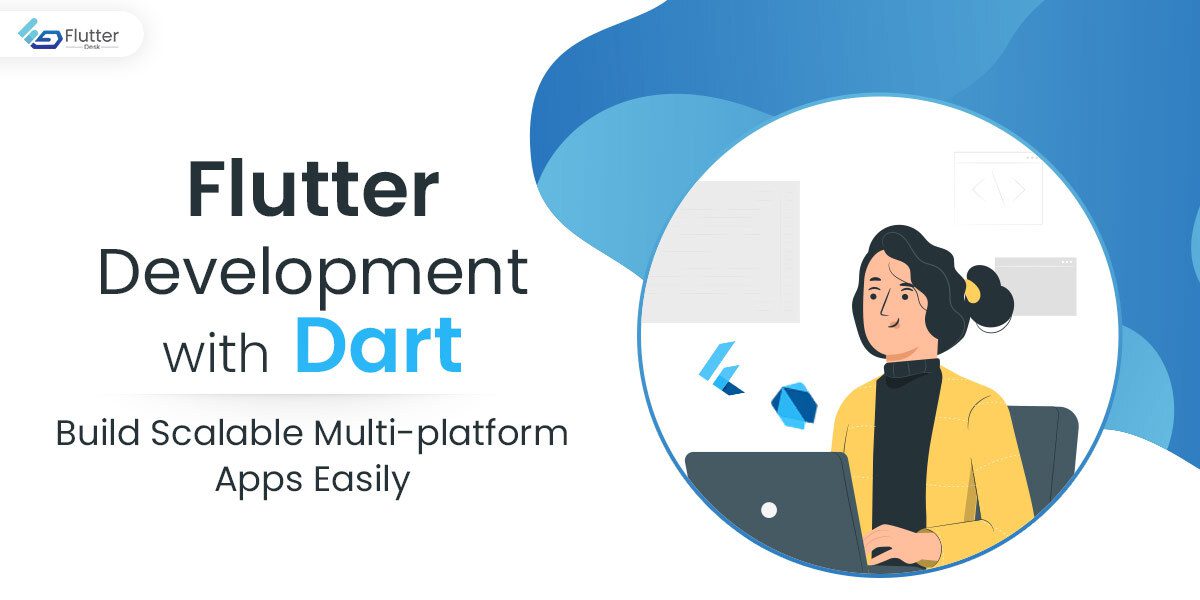 Although this cross-platform framework is newer, it has become a leading priority of various companies like Cordova, React Native, and Xamarin. This powerful, general-purpose tool is highly in use today and you can find numerous Flutter applications on Play Store as well. This blog will provide everything you need to know about Flutter so you can set your Flutter development with Dart in motion.

Flutter’s first stable version 1.0 created a splash in the world of application development. This was mainly because of one of the distinctive features of Flutter – use of a single codebase and programming language. Flutter development with Dart facilitate developers build a native app for both Android and iOS in a much simpler and faster way. Flutter’s development approach was also different from others, mainly because of its declarative UI writing.

Before you get down to the development process, you first need to make sure you have a complete picture of the kind of UI in mind. For some developers, it improves clarity, but for others, it can create certain difficulties. Flutter’s framework consists of both an SDK – a software development kit – and its own widget-based UI library. You will find various reusable UI elements like buttons, sliders, and text inputs in this library.

Google’s Dart is both a significant advantage and a notable drawback of Flutter development. The language was initially released in 2011 but it wasn’t until the launch of Flutter that the language became popular among developers. The inspiration came from other programming languages, mainly JavaScript and it is hence, Strongly Typed. You can use Dart to build just about anything on mobile, desktop, and web.

When used for web applications, we have to compile Dart to JavaScript. In other words, Dart can semantically fit inside JavaScript, which is why it is simpler and easier to develop apps in Flutter. Whatever you write in Dart will compile to JavaScript. There is nothing innovative here, it is just a simple and predictable language with no special operators that could throw you off the loop. This is what makes Dart programming simple and productive.

Use of Dart in Flutter: The Practical Advantages

Some of the developers are quite skeptical about the use of Dart in Flutter. The language is growing steadily with time, but it is not one of the hot languages in use these days.  Does Google use Dart simply because it’s their language? That is not entirely true. Developers find learning Dart to be less of a hurdle as compared to other programming languages.

Following are some practical advantages that come with the use of Dart.

When it’s time to develop applications, developers are most inclined toward cross-platform frameworks, but they are not restricted to Flutter only. However, within a year, Flutter usage has grown from 30% in 2019 to 39% in 2020.

The users of React Native are coming towards Flutter, and this is because of the following advantages that Flutter has, over other frameworks.

By using the same code base for your iOS and Android apps, you can save both time and resources. This productivity is further enhanced due to the feature of hot reload, which exists due to JIT compilation. Hot reloading allows you to catch a glance at the applied changes in real-time. The developer can simply pause the code execution, make the desired changes, and then continue where they left off. This feature not only speeds up the development process but also allows makes room for experimentation. Altogether, the entire process is faster, consumes fewer man-hours, and hence has more time-to-market speed.

Flutter team works hard in providing you with a wide variety of ready-made widgets. They are also highly customizable and save time. Flutter also has a large set of Material and Cupertino widgets that can mimic the behavior of each design language perfectly.

One good thing about Flutter is that it does not rely on interpretation or any intermediate code representations. This allows similar to native app development. Through native code base and third-party integrations, developing gets easier.

Most of the advantages mentioned above would not have been possible without Flutter’s high-performance rendering engine, Skia. Most of the famous application softwares like Chrome, Adobe, and Amazon Kindle use this graphic engine. Due to the use of Dart, Flutter compiles directly into the ARM code of mobile devices. Skia communicates with Flutter apps and in turn, Flutter accepts local events directly rather than compiling them first into JavaScript. With Skia, you can now virtually launch Flutter’s UI on any platform. This simplifies and speeds up the development process greatly.

Flutter’s architecture allows the developers to build custom UI. You can customize whatever you see on the screen, regardless of the complexities. With custom designing, you can create applications that would look good on both iOS and Android by putting fundamentally lower efforts.

Various applications make use of advanced OS-level features like Bluetooth, GPS coordinates, permission handling, and so on. With Flutter, many of these options are available through ready-to-use plug-ins supported by Google.

While there are several advantages that the developers and businesses can take advantage of, there are some cons of Flutter too, which you need to be aware of before you start developing.

As mentioned earlier, Flutter is a relatively newer technology, due to which the volume of third-party libraries is limited. This reduces the speed of the whole development process significantly.

A new Skill to Learn:

The programming language of Flutter is not quite popular which adds another phase of learning for the developers. However, Dart is easy to learn, even for beginners with little programming knowledge.

Storage Issues due to File Size:

The apps developed through Flutter are relatively larger, which can cause storage problems for some mobiles. The same app if created in native Java will be of smaller size.

You might not be able to get all the desired functions in the limited library of Flutter. However, Flutter is working rapidly towards the expansion of its functionality and creating certain tools for its user, helping the community grow.

With over half a million users monthly, Flutter’s popularity is growing quickly. The creators are working hard in renovating Flutter, turning it into a more powerful tool for developers. As of 2020, we have seen many useful updates like alignment with Dart, the branching model, and Adobe XP support for Flutter. However, a major update was announced in March 2021, namely Flutter 2.

With Flutter 2, the developers can now create innovative, portable apps for any platform. By using a single code base, you can shift the native apps to five different operating systems mentioned below and on the web:

Not only that, Flutter 2 is perfect for today’s ambient computing world as it can now be embedded in TVs, smartphones, cars, and smart home appliances. Flutter has thousands of contributors adding more to its core framework and expanding the user community.

At the recent I/O conference, Google announced the preview of Flutter Web which allowed Flutter 2 applications to run in a browser without requiring source-code modification. This transition has turned Flutter into a full-blown cross-platform development tool. Another update was Null safety, which reduced the chances of errors and app crashes improving user satisfaction.

We will be forever amazed by the world of Flutter and the future it is building. It will surely be the next big thing in the coming years with its improved productivity and reduced development time and cost. Hopefully, the above article helped you clear any doubts you had about Flutter development with Dart and you will now be proceeding with your application development or hire a flutter developer for that.

Lastly, if you have any questions or suggestions, feel free to comment below. FlutterDesk would love to be of help and pave you out of any complex technical problems.