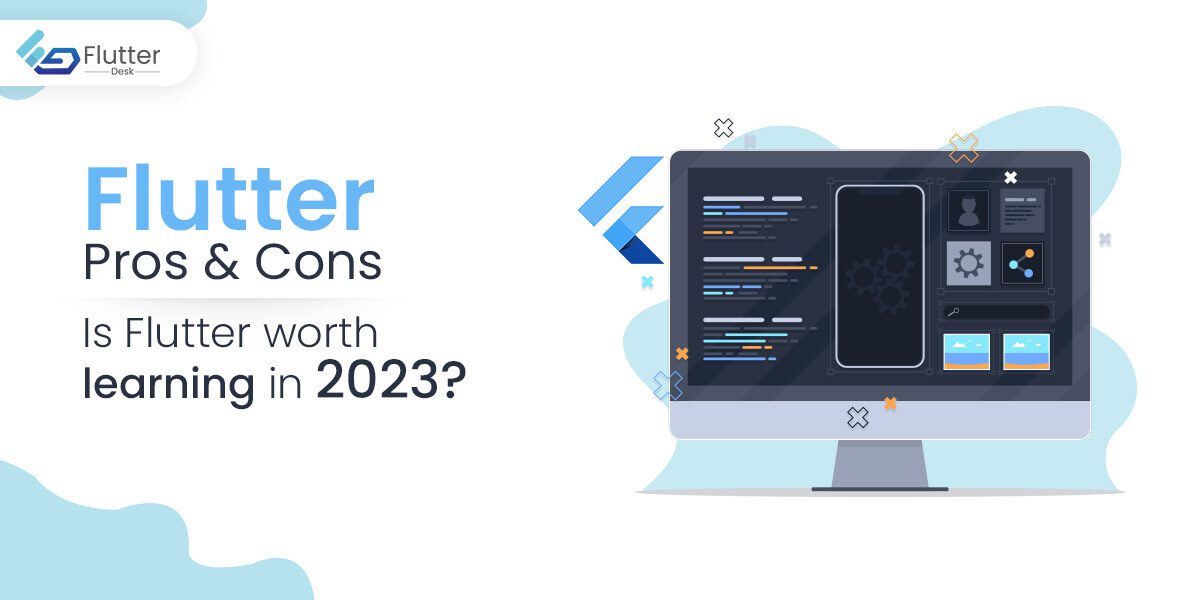 Want to learn exactly what is flutter and what are the flutter pros & cons? Don’t worry in this blog we’ll guide you all about flutter app development services. So, let’s dive in!

Fluter is a cross-platform for building and developing apps on iOS and android. Google first made it available in 2017. It is Google’s UI kit for creating stunning, natively built apps for desktop, mobile, and web by using a single codebase.  Flutter has two parts:

How does flutter work?

To understand how flutter works you need to know all about flutter and its relevant components. Flutter has widgets, a foundation library, and an engine. When developing apps using Flutter, you must begin with the end in mind due to its declarative UI writing. Because of this, the user must have a distinct mental image in mind before starting to work on a new component.

Different widgets can be combined and matched by developers to create the entire user interface.

Developers can construct devices that can combined with existing ones using Flutter. Additionally, Flutter provides a variety of software packages that make it possible to access Firebase and Redux data warehouses in order to enhance application capabilities and enhance the user experience.

Everything has its own pros and cons. So, when it comes to development it also contains some positive and negative aspects. To know about the flutter pros & cons, let’s take a look at the points mentioned below,

Flutter is an open-source framework of Google to build native, fast, and creative UI websites. Also, it is a new technology and contains amazing features to amaze users through its creative apps. Additionally, it greatly simplifies contributions and helps flutter communities. In essence, it gives you the freedom to play, which makes it a preferred SDK among developers.

Developing apps takes a lot of time as it consists of tough processing which decreases productivity. It has been seen that most developers take lots of time while developing code. But in contrast, hiring or having a flutter app development skills save a lot of your time. Just because of, its hot reload button and easy-to-understand Dart language. The fascinating fact is that flutter app development is 20-50% faster than creating two native apps.

The amazing point of this section is that you can easily do cross-platform coding.  This means that you can easily share the same coding on two different apps.  Because, When flutter integrates UI and business logic between android and apple devices, developers met with a smooth experience regardless of the operating system.

As flutter runs on several platforms it makes integration on that platforms much easier. For instance, various screen sizes have completely dominated the market. Flutter features a single code base for all screens, unlike other frameworks that could take more work to get active on various screens.

Flutter-created apps are incredibly effective on any screen they are installed on. This extends much beyond smartphone apps.

5- A hot reload – Speed Up Development

This feature of flutter app development amazed developers. Because it saved developers lots of time when it comes to reviewing the code or re-running the application again. The hot reloaded button shows the real-time analysis of their coding while developers currently doing their coding. Amazed you?- start using the app now for saving your time.

With a flutter, you can shorten your time while developing your code by sharing the same code on two separate apps. So, when you have this great opportunity you can program your code quickly and fastly. Why is that? Well, as I just explained, creating apps with flutter for iOS and Android is simpler because it only takes a single programming language and codebase.

The first question we ask ourselves when we build something is, “How much will it cost?”

We discovered that Flutter is significantly less expensive than competing frameworks or SDKs while reading through various Flutter reviews. Lower costs, therefore, result in more drive.

The concerns about app maintenance have been allayed by the technical stack of Flutter. Less coding needs to be written down, therefore checking, modifying, and improving the codes takes less time and effort. Interesting fact: There are currently a growing number of Flutter apps in the Google Play Store.

9- Perfect for MVPs in startups

One advantage while using flutter is that it works well with startups who want to show their MVP (mini visible product) to their customers and investors sooner. It contains a documentation part too, which means easily understanding users’ examples and cases in a real-time environment.

Undoubtedly, Flutter has a strong community and is a potent UI toolkit. According to several developers’ reviews of Flutter, the framework’s success is a result of its capacity to generate apps faster and with less coding.

Flutter is a new framework introduced by Google. So, as a result, most of the developers have trust issues while using this app. Also, they’re not sure while interacting with coding strategies being used in it. In essence, it takes time to reach more.

The one disadvantage is that the file size of the flutter app is more than the Java apps. As it is a single codebase it contains a large file size, and that’s why most developers don’t consider it good. Flutter app file size is in MBs, while java apps file size is in KBs.

As a UI kit, Flutter uses a range of widgets to reduce its reliance on outside libraries that speed up the software development process. It indicated that flutter has substantially fewer libraries (15k+) than React Native, its true competitor. But there are enough libraries there.

4- The use of native APIs

Dart may limit your ability to use low-level native capabilities that call for writing native code and understanding how the underlying iOS or Android platform functions.

However, in general, native code can accessed from Dart code, therefore theoretically, any native SDK should be accessible in a flutter project.

Is it beneficial to learn flutter in 2023?

Less time-consuming, fast implementation process, share code on two different apps and hot reload button, makes flutter app more worth learning in 2023. As it contains amazing features to drive user engagement. Flutter’s growth is still accelerating. We can fairly expect that there will be a lot to see in the future given the huge advancement and success of the framework.

So, now we have a brief understanding of the Flutter app as we know about the flutter pros & cons. Here, we discuss in detail about flutter pros & cons. It is a winning app when it comes to creating cross-platform applications, Flutter is a top choice. This is true that Flutter has established itself as one of the top frameworks for programmers. It gaining more reach and positive reviews due to its popularity and high performance. Additionally, in the development phase, a lot more will come to see in the near future. So, till then, let’s make amazing flutter apps. Stay connected!

Hire Haroon
PrevPreviousApp Development on Flutter vs React Native – Key Differences
NextHow do I develop Custom Apps for my Business in Flutter?Next
Translate »