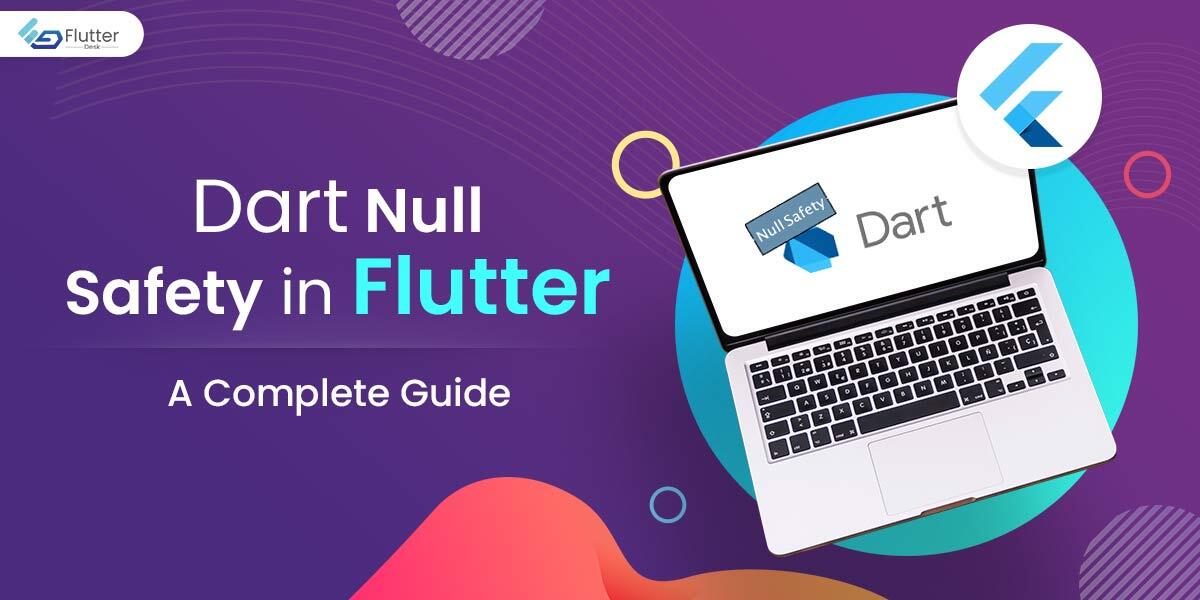 In a Flutter app, dealing with null values in the code is always a hectic task. Several runtime errors can be caused if a function has a null value. Ultimately, it will cause app crashes. Dart Null safety is a feature that handles null values. Null safety is not originally a feature of Flutter but a specification of Dart language.

Flutter is one of the most reliable and broadly used frameworks when it comes to application development. It has several features that collectively make it a perfect choice for developers to build cross-platform applications. The code reusability, single codebase system, rich libraries, fast testing, native nature, and own rendering engine are some of its features that we can’t leave undiscussed. There is another interesting and most useful feature of Flutter that is null safety.

What is Null Safety?

Dart null safety in Flutter is a feature that doesn’t allow a variable to have a null value. The variable can only have a null value unless you initialize with null to that variable. This feature reduces errors and app crashes which ultimately increases user satisfaction.

Interestingly, the null safety feature shows all the errors during the compilation of the code. You don’t have to wait until the runtime to identify the errors. The basic idea behind null safety is that all variables should be initialized with some value. This will reduce any runtime errors that can be caused due to the null value.   Additionally, this feature helps developers to find out where an error occurs. Whenever you see an error message like “Unhandled Exception: type ‘String’ is not a subtype of type ‘List<int>’ in type cast” then you should check whether the data is valid before using it.

Three core design principles support the null safety. These are as:

Code should be non-nullable by default

A variable will be considered non-nullable unless you explicitly inform Dart that it can be null. Since non-null is the most common API choice, we chose this as the default. To gain greater flexibility, you can defer some of that checking to runtime, but you must use a feature that is textually visible in your code to do so.

With the Dart null safety in Flutter, you can trust the type of system. If the type system determines that a variable is not null then it can never be null and vice versa. There is no possibility that null safety would show you any inaccurate results. This allows you to optimize the code compilation. Each variable requiring a value must be correctly initialized. Additionally, null Safety makes binaries smaller, reduces bugs, and executes faster.

As Dart brings many useful and exciting features to Flutter SDK, you can perform several actions with it. Surprisingly, you can also migrate your application to null safety using a dart. Here is a quick go-through of the migration of an app to null safety.

To migrate an application or a package to null safety, you need to follow five major steps. These steps are:

1. Make sure all dependencies are ready for migration

While migrating your application to null safety, you need to make sure all the dependencies are ready for migration. You may need to the relocation migration again after transferring the appropriate code in case any of your dependencies change during the migration.

You might need to contact the flutter package developers if any of your dependencies are not null-safe. However, an app is ready to migrate only if it can upgrade its dependencies to the prerelease versions of the path and process.

You may require tools throughout the development process while building an app. These tools help you streamline the development process by performing certain tasks. Luckily, the migration tools are there to help you analyze the nullable attributes. Interestingly, you can add nullability cues to change the attributes of a device. However, it may affect the migration quality in one way or the other.

3. Static analysis of your migrated code

You can execute the pub get command in your terminal to update your packages. This will allow you to evaluate your Flutter and Dart code statically. Following are the commands which you can run to analyze your migrated code for Flutter and Dart.

4. Make sure the tests pass

During the migration of your app to null safety, ensure that all the tests pass. You may need to rerun tests if you modified your package code to only accept non-nullable variables.

As soon as the migration is complete and the tests are successful, you can publish the prerelease packages. As a compliment, you should publish your package to pub.dev which is a public repository. This will help other developers to reuse the code if it aligns with their needs and requirements.

How to Enable Null Safety in Flutter?

Benefits of Null Safety in Flutter

There are several benefits of Dart null safety in Flutter. You can leverage it to optimize your code compilations and make the coding process more productive. However, null safety has the following features which are worth sharing:

That was it for the basic guide to Dart null safety in Flutter. We hope that you’ll find this blog helpful one way or the other. As you can see, null safety is an important part of writing safe programs in Dart. It’s also important to note that there are other ways to write safe code besides using null checks. You can use the try/catch block to catch errors instead of relying on null values.

Lastly, if you still have any questions or suggestions, feel free to comment below. Our development team at FlutterDesk would love to be of help to you. See you in the next blog, until next time, you can read our previous blogs from here.