Mobile App Advertising: Everything You Need To Know 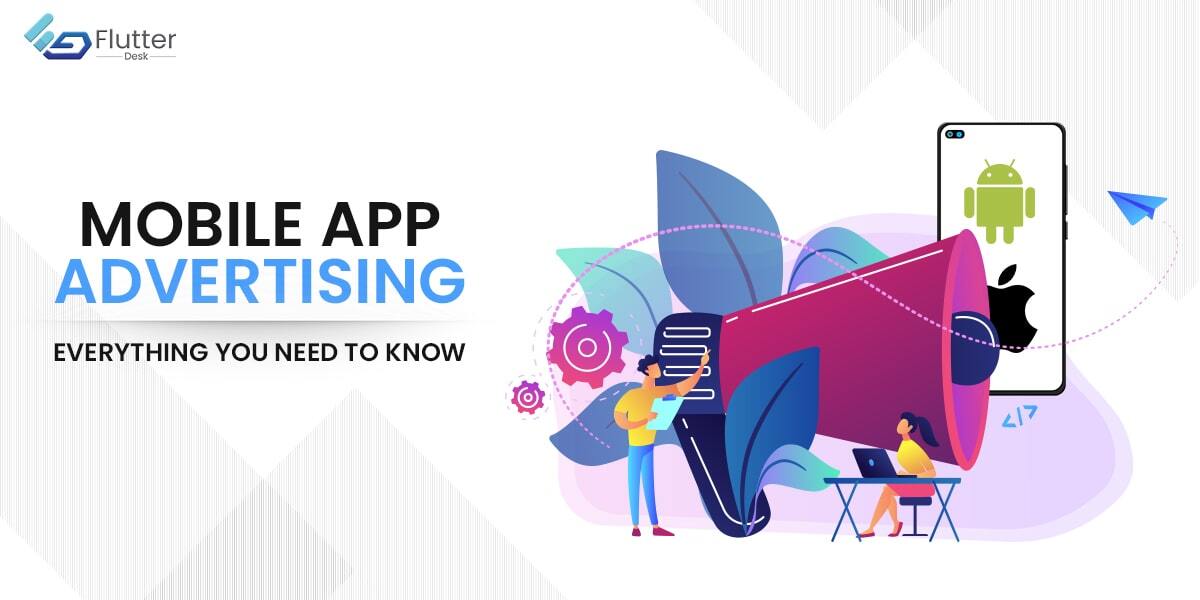 Did you know that mobile app advertising spending is expected to reach nearly 413 billion US dollars by 2022? This is the reason that businesses have realized the potential of having a mobile app developed. Interestingly, in-app advertising has also overcome TV advertising because smartphone usage has increased amazingly.

In-app advertising is the most popular type of online advertising with the potential of generating thousands of dollars in revenue. It is the best way for developers, enterprises, or startups to unlock another income stream. The popularity of free-to-download apps has raised the opportunity of making money through in-app advertising.

In this blog, we will discuss all mobile app advertising, how it works, its benefits, and formats.

What is Mobile App Advertising?

Mobile app advertising is a powerful monetization strategy for mobile app developers. The developers or publishers get paid to show ads in their apps. These in-app advertisements are a kind of interaction of the brand with a user for different purposes. The purpose could be to create brand awareness, generate sales, boost traffic, or any kind of acquisition.

How Does Mobile App Advertising Work?

To run a successful mobile app advertisement, you need to understand its ecosystem. It’s very important. As in a deal, there is a buyer and a seller. In this case, the buyer is the stakeholder or agency buying these ads to promote their brands. On the other hand, the seller is the app developer or the app owner who will promote that brand using the app. There is a middle man, too. It is the ad network that acts as a bridge between the publisher and the advertiser.

The publisher or the app willing to display the ads sends a request to the ads network which identifies the highest-paying advertisers using an advanced algorithm. It is essential for app advertisers to set ads the right way to make maximum profit. You can also target the audience based on their interests, behavior, gender, age, and geolocation. Working alongside the ad network is the ad exchange. It is a platform that behaves much like a stock exchange. Instead of just selling impressions by the amount, the ad exchange allows advertisers to pick their desired audience and bid on them.

As discussed earlier, there are different ways to promote a brand through in-app advertisements. You can outreach to the potential audience with a variety of ad formats. Following are the main ad formats to keep in mind.

These are the most common types of ads that most users would be familiar with. These ads appear like a banner, usually at the top of the screen, bottom, or sideways on the page. It mostly contains text followed by a relevant image and most importantly, a call to action button.

These ads, often known as full-screen ads, appear during any transition in any app. The interstitial ads are actually less intrusive. These ads suddenly appear and grab the user’s attention covering the full screen. Because of this, the developer has to be strategic about how and when to show these ads.

Native ads usually appear in the regular flow of content. For example, when you’re scrolling through social media and an ad appears the same as a post on the platform. These ads have a purpose to grab the attention of users by blending into the look and feel of the app.

These are short video clips that appear when you’re watching any video. Video ads can appear before, during, or at the end of the video you’re watching. These ads are highly engaging and have a higher click-through rate. Additionally, there is another type of video ad which is “rewarded video ads”. These ads are a good sort of trade. You get rewards for playing a video clip for a limited duration.

In this era of digital evolution, there is a massive opportunity for mobile apps to generate revenues. According to Statista, mobile apps will generate more than 613 billion U.S. dollars in revenues by 2025. This intensifies that there is a huge gain to make if you do in-app advertising effectively.

Let’s discuss a few of the in-app advertising benefits.

As discussed earlier, there are different formats for mobile app advertisements. You can test different kinds of ads and choose the one which performs the best among others. Later on, you can combine the mobile app ads with the in-app purchases and generate massive revenues.

If you place the ad in the right place and at the right time, there is a high possibility of increasing user engagement. It encourages the user to interact with the ad and develops an interest. It further leads to user retention and revenue generation ultimately. These are most effective in the case of gaming apps. The user gets rewards (in terms of in-game currency) for watching a video ad in the app. These ads are highly effective because users initiate these ads intentionally. This increases user engagement to a definite extent.

It is always the best practice to show ads to the users at the right time and in an organized way. This includes designing the ad and integrating it into the app such that it doesn’t create a mess. Moreover, it should not cause the user to feel irritated due to showing ads repetitively.

I hope this article helps you understand the basics of in-app advertising. Moreover, you can make strategies yourself and run your ads effectively. Are You finding Flutter Expert to hire you should hire from a reputed Flutter development agency