Top 15 Flutter Interview Questions and Answers You Must Know 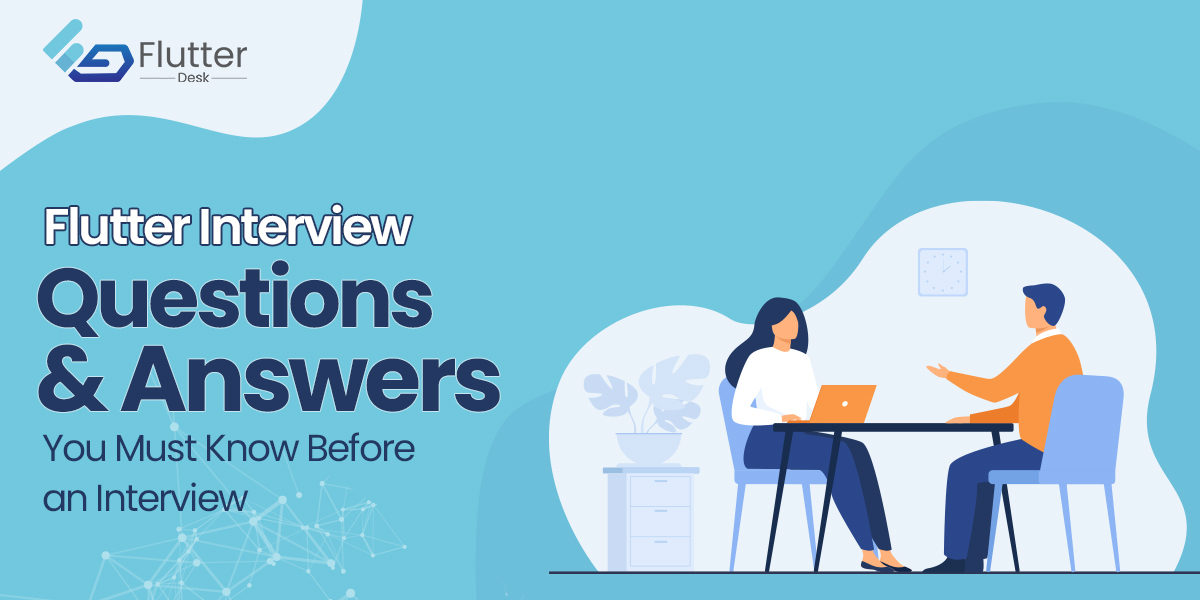 Originally developed by Google, Flutter is an open-source framework that offers a fast, productive, and reliable application development experience for all digital platforms. Flutter has gained a lot of popularity in a very short period. Developers love to choose flutter over any other platform because of its independence and simplicity, unlike other platforms.

Flutter is the only framework that allows building Android and iOS apps without making any changes to the code.

Flutter Interview Questions and Answers (All about Flutter and Dart)

You don’t need to be very comprehensive at Flutter interview questions and answers. A short, but precise answer is the key to success.

If you ever need to shift your job as a flutter app developer or join a company as a fresher, you should must prepare for the following flutter interview questions and answers.

What do you know about Flutter?

Answer: Flutter is a single codebase open-source framework used for application development. It is a UI toolkit for building fast, productive, and natively compiled multiplatform applications using a single codebase. We use dart language for coding flutter apps.

Give a short note on Dart and its importance.

What are widgets in Flutter and their importance?

Answer: Everything you see inside Flutter is a widget including layout models, images, and texts. Any of the code you write or make any change while building a flutter app happens inside a widget. Widgets portray how your app is going to look depending upon its current state. As you modify the widgets, it automatically rebuilds its description based on the difference between the current and the prior state of the widget. Moreover, it will sync with your app’s UI too.

You can say widgets are the building blocks of your app. As you build an app, it starts with a widget and ultimately ends on a widget. Widgets serve a variety of aims which include animation, input functionality, async functionality, interaction models, accessibility, scrolling, and style, among many others.

There are two types of widgets which are as follows:

Why would you choose Flutter over any other platform?

Answer: Flutter has several advantages over any other platform. It always fulfills the developer’s needs and requirements.

Following are some of the salient advantages of using flutter:

Reduced Code Development Time: Flutter’s hot reload feature allows you to implement and view the changes instantly. This is what makes it a fast development platform, unlike others. Additionally, there are a lot of customizable widgets inside flutter which makes your experience at ease. As you can change the widget’s state according to your needs.

Similar to Native app Performance: Flutter leads other cross-platform apps in terms of performance. This is because it builds the app directly into machine code. So, you don’t have to rewrite the code to shift to another platform. This decreases the possibility of performance dearth.

Strong Community Support: Flutter’s community is growing so fast. Anyone can get out of the issue within hours of seeking help from GitHub or several other platforms.

Minimal Code: Each Flutter app is built using Dart programming language, which uses JIT and AOT compilation for faster startup time, faster performance, and smoother functionality. With the JIT feature, you can increase the speed of development and refresh the UI here are some flutter card ui design examples.

Answer: Flutter has the following features which could not be left undiscussed:

Hot Reload: Whenever we’re discussing the perks of flutter, the hot reload feature could not be left unlisted. Hot reload enables you to view and implement quick changes to the code without restarting the software.

One-stop Solution: Flutter app development counts on a single framework and platform for the application development, deployment, and management of changes despite using separate platforms and frameworks for different purposes.

Code Reusability: Flutter has one of the most useful features is its code reusability. Cross-platform app development companies readily opt for flutter because you don’t have to rewrite the code when moving from one platform to the other.

Immense Widgets Library: Flutter has a lot of conditional show widgets inside it. You can easily change their states according to your needs and requirements.

What do you know about editors in Flutter? Name some

Answer: You can use any of the text editors to build apps in flutter combined with its command-line tools. These plugins help you with code completion, syntax highlighting, widget editing assists, run & debug support, and more.

Developers can make Flutter development faster and thus boost their productivity. In order to develop mobile applications, Flutter IDE and tools require some plugins. With these plugins, we can compile Dart, analyze code, and develop Flutter. Following are some popular IDEs for Flutter development:

What are the limitations of Flutter?

Answer: Alongside the benefits and reliability of choosing flutter for application development over any other platform, there are some limitations or drawbacks too. Such as:

Lack of Third-party Libraries: As flutter is popular but still a new thing in app development, there are limited third-party libraries in it. Although developers discover newer features, there is always the need to add more libraries in Flutter.

Large-sized Files: Flutter has usually large-sized release files which can frustrate a limited audience. Although, a large app’s size is responsible for its optimal performance. But it’s not easy to understand the audience you’re appealing to.

Lack of overall support: As Flutter is not so widely used yet, it doesn’t have enough staff to handle all the developer’s support. Even though it enjoys the attention of tech enthusiasts, it still lacks continuous support, surely it’s a time taking process. Currently, only the flutter community is whose support Flutter is receiving.

What are the different build modes in Flutter?

Answer: The flutter framework compiles the code in different ways or modes depending on your development phase. We call these modes as “build modes”.

Following are three different build modes based on development phases:

Debug mode: Using this mode, we can debug our apps on a physical device, emulator, or simulator.

Profile mode: In this mode, we maintain some debugging abilities which are enough to analyze the app’s performance while testing. Moreover, we do tracing and enable some extensions too.Release mode: This mode helps minimize the size of the footprint and maximize optimization. Debugging, assertions, and service extensions are disabled here. Faster startup, faster execution, and less size are its key features.

What is the difference between Hot Reload and Hot Restart?

Answer: While building any dart application, we need to run the app which takes a considerable time. Flutter has two features for this purpose.

What are Packages and Plugins in Flutter?

Answer: Packages in Flutter are a kind of contribution of developers to flutter. These shared packages help developers to build apps quickly without building everything from scratch. There are over 18,000 packages available to help you add functionality to your Flutter application and leverage solutions that the community creates.

Difference between Flutter and React Native.

Can you name some famous apps that use Flutter?

Answer: There are many famous apps in the market right now that use flutter for development updates or any other concern. Some of them are:

How can you make an app more interactive?

Answer: We can modify dynamic widgets to adorn the response to user input. We can manage the status of a stateful widget by either the widget itself or the parent widget, or even both. We can add tappable buttons, relevant colors, and improve responsiveness to increase the interactivity of your app.

What are streams in Flutter? Enlist its types.

Answer: A stream in flutter provides a way to receive a sequence of events. Each event is either a data event, also called an element of the stream, or an error event, which is a notification that “something stopped working”. When a stream emits all its events, a single “done” event will notify the listener that the event has ended.

How can you test your app in Flutter?

Answer: As you add more features to your app, it becomes more difficult to test the app manually. So, flutter has three types of automated tests that make sure that your apps I working perfectly fine before you publish them. These tests are:

This was all about a quick go through the basic flutter interview questions and answers. If you need any assistance regarding flutter app development, you can consult a flutter developer from FlutterDesk. We would love to be of help.