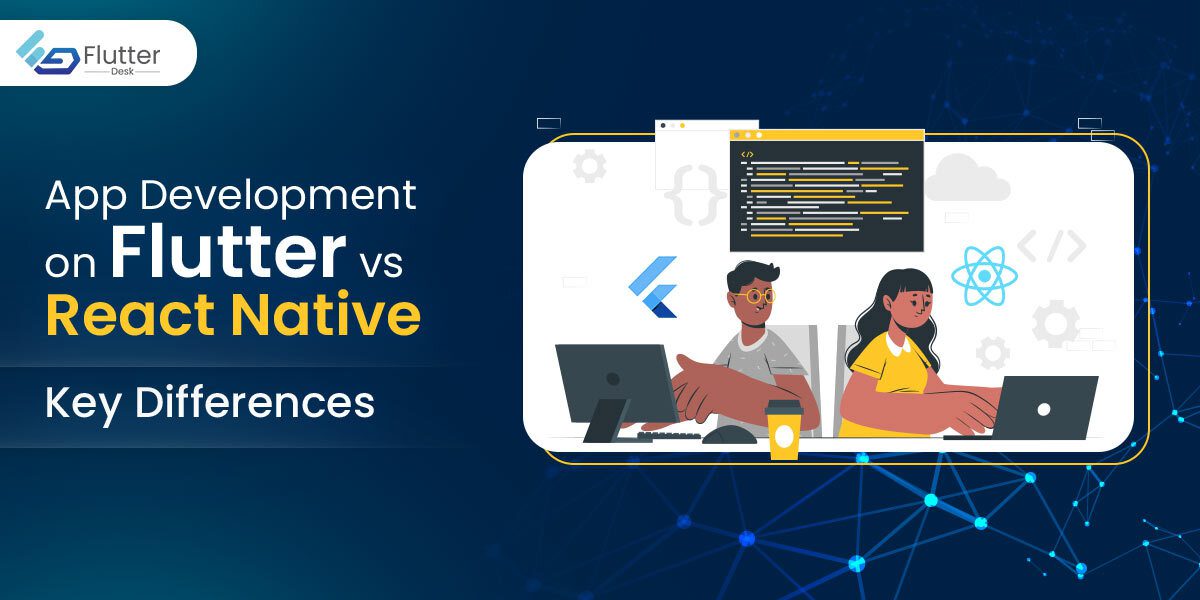 If you have a great application idea, you might be thinking about what could be the best way to bring that idea to life. You might think of using native SDKs but that is time and cost-consuming as you will be coding twice, for both Android and iOS. Because depending on the OS and device, you’ve to write native frameworks in different languages. So, in case you cannot afford to hire two different teams for your app, your best option is to use a cross-platform SDK. The two most popular hybrid frameworks designed for this purpose are in close comparison: Flutter vs React Native.

Both are free, open-source frameworks offering a large variety of options. They are also growing continuously and coming up with new updates to overtake the competition. So which of these cross-platform solutions is the best option for you? We have compiled a brief list of key differences between the two to help you make an informed decision.

When it comes to Flutter app development Services, there is no compromise on quality, speed, and performance. And along with Android and iOS, Flutter has also extended its support to Linux, Windows, macOS, Fuchsia, and web app development. React Native, created by Facebook, supports cross-platform app development on mobile, web, and desktop. But React Native has a huge advantage because of the programming language it uses – Java Script. Since it’s a common language as compared to Dart, developers find it easier to shift to React Native. Moving towards the comparison of Flutter vs React Native, you can consider the following points for your app development.

React Native was launched in 2015 so it has more maturity than Flutter. As a result, it has excellent documentation for app developers. But it isn’t straightforward and some important features like navigation are not structured properly. Flutter’s documentation is brief but rich, well-formatted, detailed, and structured. It is also much easier to navigate.

React Native is not that detailed as its major focus is on mature developers. But Flutter’s guides accompany video tutorials as well as graphics so that even a beginner can learn it fast. Furthermore, Flutter has several development tools for your assistance in app development, including Flutter inspector and debugger.

In React Native, the programming language communicates with native modules through the JavaScript bridge. The two sides communicate through JSON messages. Even though the messaging is asynchronous, the bridge affects the rendering speed and can cause a lag in UI at the end.

Flutter, however, communicates directly with the native components. Because it has everything packed in itself including frameworks like Material Design and Cupertino. Because of this advantage of Flutter app development, Flutter apps are more stable on different platforms.

Regarding project size, Flutter needs a minimum of 2GB of available disk space. And since flutter has a large build size, the default app size can exceed 60MB. Meanwhile, the size of React Native apps can be reduced from 26.1MB to 3.1MB by enabling ProGuard and Hermes. This makes React Native a preferable option for mobile app development.

Both Flutter and React Native share the feature of Hot Reload (Fast Refresh in React Native), allowing you to make quick iterations and get updates easily. This speeds up the development process. Additionally, React Native has high code reusability and its dev community has also built a lot of libraries that serve as building blocks. Flutter’s libraries may not be as rich but it offers faster compilation and less testing time. Flutter also contributes to code reusability through its highly graphical and intuitive user interface.

The process of debugging can be quite complicated in React Native. This is one of the aspects that makes it less desirable for developers. Debugging can get more problematic if there is an error or a specific exception to the native part of your application. Because on the native side, there is a chance that the bug can come from React Native or third-party libraries. The users of React Native prefer to use Flipper for debugging mob applications.

In Flutter, you can use Flutter Inspector which will help you debug the visual layer of your application by showing why it looks the way it does. Also, Flutter provides the aid of different debugging tools like DevTools and OEM Debugger that support app development in Visual Studio and Android Studio.

Comparatively, React Native’s ecosystem is bigger than Flutter’s because of its repository of packages – node package manager (npm). Npm has been around for a long time and it is mainly geared around web development. You can also adopt some of the libraries to React Native apps. However, there is a downside here. Many of the available libraries are low quality and barely useful in production while some packages have been abandoned altogether. So you have to tread carefully.

Flutter’s repository pub-dev, although quite young with less read-made solutions, has grown enormously since its launch. Since June 2022, Flutter stands at 389,762 repositories and the launch of Flutter 3.3 has further expanded this repository. Whereas React Native has 300,521 repository results.

Both Flutter and React Native platforms have the support of huge and flourishing communities – Google and Facebook respectively. The communities conduct their annual conferences, events, and hackathons regularly. The platforms have a huge community size and communication channels where there are experts to tackle your questions and provide development solutions.

From the 2022 update, you can notice that Flutter’s community has grown a lot. This means that there are now more developers and experts working actively to improve app development for its users.

Flutter has been a part of the tech stack of companies like:

React Native has been a part of the tech stack of companies like:

So what is the global trend in the demand for Flutter vs React Native?

After staying at the bottom of the popularity list in 2019, Flutter gained popularity and managed to stay in close competition with React Native, overtaking React Native in 2020. In 2021, Flutter secured its position as the leading cross-platform for mob app development and surpassed React Native by 4%. So, we can say that even though the two technologies are almost equal in demand, Flutter has been gaining more popularity recently.

Although in its June 2022 update, React Native introduced a new bridge module JavaScript Interface (JSI) for faster communication with native components. But still, the Flutter app’s performance is faster as Flutter does not rely on bridges at all.

Considering a developer’s perspective it is easier to learn Flutter than React Native. How?

Well, as compared to Dart, JS is much unfriendly with its unnecessarily complicated programming. Furthermore, the framework has some nuances, and without being familiar with it, you would end up wasting hours trying to configure the developer environment.

On the other hand, Flutter’s framework is easier to navigate and developer-friendly. Flutter’s programming language, Dart, is also easier to understand and work with, as compared to JS. Also, Dart is closer in its usage and paradigm to languages used in native app development.

When to Use Flutter

Flutter app development should be your priority when:

When to Use React Native

React Native app development should be your priority when:

All in all, both Flutter and React Native are great choices for mobile app development and they allow the users to save both time and money. If as a developer you have just taken a start, then we recommend you to make some attempts with Flutter as well because the platform is gaining popularity rather quickly.

For your Flutter project, you can hire your developer team at FlutterDesk for project consultation, development, and a successful launch.