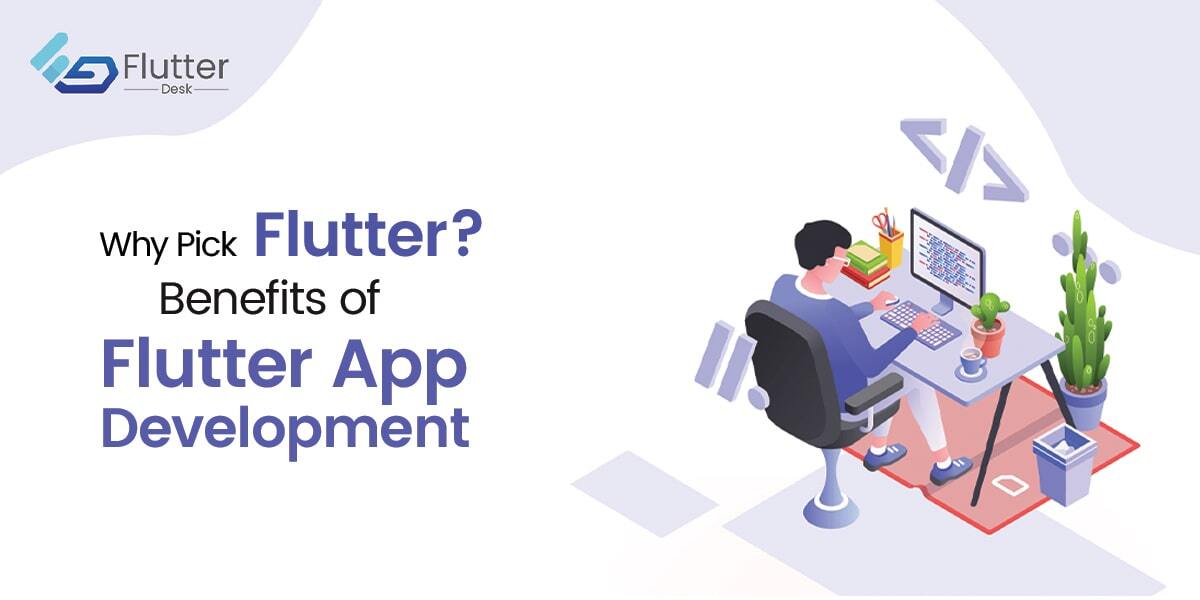 Developers around the world are looking for tools that can ease their work a little and make the process more efficient. It’s time for you to make some effective tech decisions. Start by joining the Flutter community. This UI toolkit from Google enables smooth, cross-platform application development. Through Flutter app development services, it will be much easier for you to develop and deploy fast and visually appealing applications for basically any platform.

In the blog below, you will learn how Flutter app development will be a good solution for your troubles and how it can be a cost-effective option for your companies.

Before we list all the benefits of Flutter, let’s get to know this artist first. Flutter is a powerful development tool that allows users to create apps for different platforms using a single codebase. It’s an excellent choice for those who had to develop two separate versions of their app (for Android and iOS). Another thing is Flutter’s ready-made widgets which incorporate both the Material Design (Android) and Cupertino (iOS) widgets, providing your app with a native look.

The programming language that Flutter uses is Dart, an object-oriented language that can sometimes be faster than JavaScript. Dart is easier to learn as the syntax closely resembles JavaScript, and makes use of JiT (Just in Time) and AOT (Ahead of Time) compilation.

There is another advantage of cost management here. For entrepreneurs who have just taken a start, you don’t need to hire different flutter developers to create different versions of your app. Flutter is continuously working towards updates, the new version 3.3 was released quite recently offering many new features, which you can read here.

Flutter is becoming everyone’s priority now and the following are the reasons for its increased popularity.

Shipping your application for testing can sometimes take forever but Flutter has ended this headache for you by introducing the hot reload feature. You can now see the changes in real time and make adjustments accordingly. You can add new features, fix bugs, and experiment with different features faster. So firstly, you get to save a lot of time and effort. Secondly, it enables developers and designers to corporate easily, they can experiment with different ideas, and see the changes on the spot.

Application testing is the analysis of an application for its proper usability, functionality, and performance. Testing the Flutter app will be faster, firstly because of the hot reload feature, and secondly, you won’t be testing several versions of an application but a single version.

Flutter is a free, open-source SDK (Software Development Kit) by Google. So it is easily accessible to everyone. You can then modify it to your use accordingly.

Flutter has Got Widgets for You

Flutter app development is less time-consuming for another reason – its extensive library of widgets that are highly customizable and ready to use. Not only do you get the core layout widgets but also a large variety of Cupertino and Design widgets. Additionally, you can also design and create your widgets.

Skia and a new Shift towards Impeller

Skia is Flutter’s own open-source 2D rendering engine. It helps you create identical UIs (user interfaces) on all platforms. The development process has been simplified for you in this way as there is no need to adjust the UI when transferring it to a platform. The recent update of Flutter, its 3.3 version is moving its users towards Impeller which will deliver silky-smooth animation to its users.

The performance of applications developed with Flutter is almost the same as a native app. Flutter is cross-platform but it does not rely on intermediate code interpretation or representations. As there is no interpretation process, there won’t be any performance bugs. Furthermore, a Flutter app sometimes provides an even better Ul animation experience than a native app.

Today, mobile applications also rely on various OS-level features like permission handling, getting sensor data, Bluetooth, GPS coordinates, and so on. When developing an application with Flutter, you can easily implement these features through ready-to-use plugins that are easily accessible. If the required feature doesn’t have a plug-in, you can establish communication between Dart and platform-native code through the help of platform channels.

Being a Cross-platform, Flutter is Cost-effective

To build native applications, business owners had to invest a lot in creating different versions of an application. But with Flutter 3’s cross-platform, you can develop apps for Android, iOS, Linux, macOS, Windows, Google Fuchsia, and of course web. This makes Flutter a cost-effective option for you with reduced expenses and less development time. You can find a Flutter team for your project at Flutterdesk.

Do you want to show your investors the real-time features of your application? Flutter is the best option to create an MVP of your app and validate this idea of yours. It will also help you get an estimate of how your app will behave on different OS.

The Flutter community has consistent support from Google as a result of which any issues or lacks get fixed right away. Flutter has always been consistent with its updates and the 3.3 version has made some improvements too like better touchpad input and global selection, etc.

Compared to its competitors, Flutter app development is faster because of hot reloading. It requires fewer developers as it is a cross-platform, and fewer working hours because of its rendering engine for all the platform-specific UI experiences. Since your application will be built sooner and ready to be launched, it has a faster time-to-market speed.

One of the co-founders of Flutter Eric Seidel will be leaving us this month. He was the first one to introduce the concept of Flutter to the whole world back in 2015. But now he plans on starting something new and is leaving with a reminder that Flutter app development will radically improve much more in the coming years.

How is Flutter the future of app development?

Flutter offers numerous advantages not just to developers but also to businesses. It offers a chance to build high-performance, beautiful applications with minimal risks. Not only does it offer huge UI customization potential but also faster development and less testing time. Unlike React Native, Flutter now officially supports all six platforms, offers plug-ins, has a consistent UI, and offers near-native app performance.

On the other hand, Businesses today wish to deploy their applications across various platforms at lesser expense and time consumption. And Flutter has provided these advantages this ease.

There have been several updates since its launch, compared to its competitors, and it only means Flutter is here to grow. It has a successful future ahead. So, if you are thinking of bringing your app idea to life, you can discuss the details with our teams at Flutterdesk.

Flutter’s powerful and resourceful platform can no longer be avoided. We have offered you a gist of the major advantages of Flutter app development and now it’s up to you to make a decision.