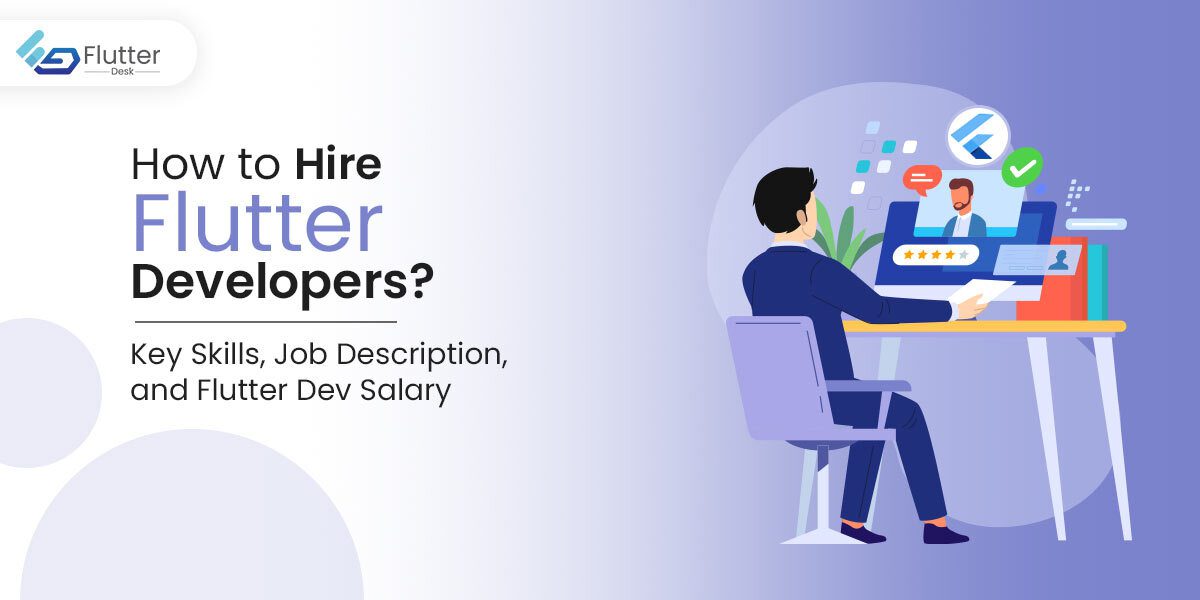 Since Flutter was launched in 2018, it has been one of the most popular cross-platform app development frameworks. It is essential to look for a specific set of skills on a junior developer’s resume if you want to hire Flutter developers in this highly competitive market.

Flutter is preferred over other frameworks because it saves money, time, and energy. You don’t have to build mobile apps separately for iOS, web, and Android devices. It is possible to develop apps that run on multiple platforms using Flutter.

A flutter engineer must have a basic understanding of programming languages that are commonly used in mobile app development. In addition, familiarity with SQLite, Git, and software development methodologies is desirable.

Read on to learn more to know more about these key skills.

Looking To Hire Flutter Developers? The Top 6 Must-Have Skills To Pay Attention To

Here are some of the skills that are enough to get you going in the Flutter market:

Flutter app development requires an understanding of programming fundamentals. You need to know the concepts like inheritance, polymorphism, object-oriented programming, arrays, and more. Additionally, you should know how to program in C, C#, Java, Kotlin, Swift, and Lua for both Android and iOS applications.

By understanding these programming languages, Flutter developers can gain a deeper understanding of how the platform works and how they can use it. In most cases, IT companies hire developers with experience in Android or iOS development.

It is a multidimensional programming language suitable for the web, servers, desktops, mobiles, and games. Given its nature, Dart is ideal for cross-platform compatibility.

Most Flutter interview questions will have some topics related to Dart. Having a practical knowledge of this programing language will increase the likelihood of hiring.

Most mobile app developers have experience with databases. Among these, SQLite is the most famous database framework for storing and loading data. In Flutter, you will get the SQLite plugin which is pretty efficient and perform multiple tasks. SQLite proficiency is a requirement for most Flutter developers.

A Working Understanding of Git

One of the most important tools used in software development is Git. You will use Git whether you work on web development or mobile app development. GitHub is basically a version control tool. It also serves as a community for developers to interact and share code. Git is also available for Flutter with the same functionality

Knowing different work methodologies can help boost the development process. Flutter uses many methodologies, such as Agile and Waterfall.

The Agile Manifesto has 12 principles that govern a set of frameworks and practices. Agile allows Flutter developers to improve the development process and critically analyze it. It ensures all app development processes comply with valid rules and are subject to strict quality assurance checks.

Waterfall methodology is a step-by-step development process that seamlessly transitions from one stage to another. The Flutter workflow largely depends on these methodologies and knowing them can help you get hired.

App developers make several changes and keeping track of them is important to collaborate more effectively and enhance productivity. For this purpose, they use tools like Git and GitHub.

It is essential that Flutter devs know how to set up a GitHub account and are comfortable with various Git commands. They can set up repositories and are able to share them with the public.

IDEs are important to write code and manage projects efficiently. Visual Studio Code, Android Studio, and IntelliJ IDEA are some common IDEs that support Flutter. VS Code and Android Studio are the most commonly used development tools for Flutter.

It is important to use these tools when visualizing and conceptualizing ideas. Design is an integral part of app development. These tools simplify the development of software. UI tools are used to design an interface that is simple, engaging, and user-friendly. These interfaces aim to satisfy the target audience effectively.

Here are some of the popular design tools that Flutter developers should know:

The importance of soft skills cannot be overstated. Developers who are creative, problem-solvers, team players, and have good communication skills are highly valued.

Here are some common soft skills that should be prioritized:

The ability to communicate is essential when developers work together. New ideas and solutions are usually generated during the development process, which should be communicated effectively to get the best results.

Flutter developers work in teams on multiple projects. Each team has members with different roles: designers, quality assurance, developers, and project managers. Teams thrive when each member of the team plays a role and works together in a coordinated manner.

Every software project will encounter problems during development. A good developer must be able to solve problems objectively. Every developer should be able to think outside the box and come up with workable solutions instantly. They can easily identify and fix bugs.

In order to come up with new solutions, developers need to take a different approach. It is crucial for a Flutter developer to be creative in order to stand out from their competitors. In order to stay relevant, you need to keep up with the latest mobile app development trends that are creative, unique, and fresh.

The primary responsibility of a Flutter developer is to build mobile apps using the Flutter platform. In order to develop a cross-platform app that works on Android and iOS, they must write a single code base.

Flutter developers are expected to write clean, efficient code using Dart. Writing clean codes is of significant importance as it is written in a more organized form. It is easy to read and understand for both developers and clients. Moreover, if you need to update certain parts of the code, you can access it more easily.

In some cases, this responsibility extends as far as writing documentation for upgrades and usage.

Flutter devs are responsible for design and user experience. The logic behind the UI should be understandable by developers even though designing isn’t their strong suit. A better interface is essential for the success of the app.

Flutter provides a cost-effective solution for developers and businesses, making it a good choice for both. With Google on its back, Flutter is giving tough competition to React Native, Swift, and Kotlin.

Due to Flutter’s popularity and competitive market, it is becoming quite hard to get a job with minor Flutter experience. To hire Flutter engineers, IT companies must look for the hard and soft skills mentioned in this article.