How to Install Flutter on Windows, macOS, Linux & Chrome 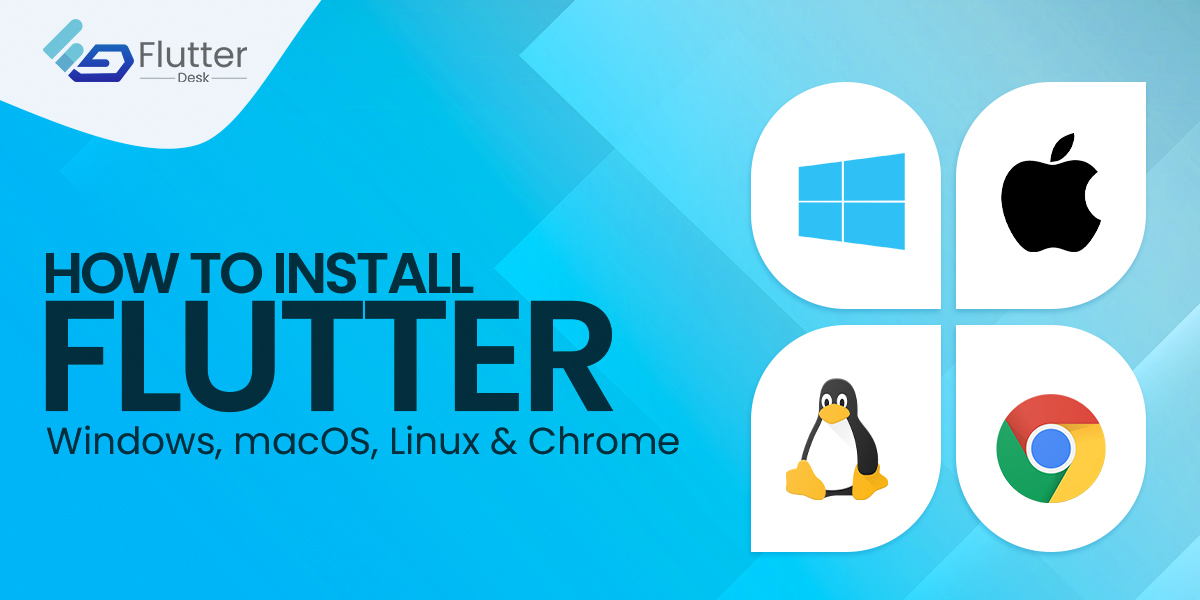 Flutter is Google’s launched framework that uses a single codebase system to build fast, productive, and beautiful apps. Although there are other development frameworks available, Flutter has its own significance in the software industry. It has several benefits over other platforms which makes it stand out in the market. As you know, the mobile app trends are evolving day by day, it’s becoming more challenging to build apps of the future. Similarly, development frameworks are advancing to cope with the newer and more complex challenges in mobile, web, and desktop app development. Moving on further, we will be discussing how to install flutter on different development platforms like windows, macOS, Linux, and chrome.

It has never been so difficult to install flutter on any operating system. Having such beneficial and useful features to build apps, flutter has an easy installation process as well. You need to make sure that your system must meet the minimum requirements to install flutter.

Let’s start with the basic steps to install flutter on windows, macOS, Linux, and Chrome OS.

How to Install Flutter on Windows?

Get the Flutter SDK

You need to download the following installation bundle to get the latest stable release of the Flutter SDK. Download it now.

You can visit the flutter SDK releases page for the latest releases and older builds.

After downloading this zip file, extract the contained flutter SDK in your desired location. We recommend creating a new folder and extracting the SDK in that folder e.g C:\src\flutter). Flutter doesn’t recommend installing flutter in a directory like C:\Program Files\ that requires high privileges.

If you prefer running Flutter commands in the regular Windows console, you can add Flutter to the PATH environment variable. Just follow these steps:

Enter ‘env’ from the window’s search bar and select Edit environment variables for your account.

Check if there is an entry called ‘Path’ under user variables.

You have to close and launch any existing console windows again for these changes to take effect.

Flutter doctor checks your environment and installation status to show if there are any platform dependencies you need to complete the setup. Run the following command and check the output carefully for any remaining task you may need to complete (report shows in the bold text).

Once you have finished every task, you can run the flutter doctor command again to verify everything has been done correctly.

For android setup, you need to install android studio.

Set Up your Android Device

Installing flutter on macOS has never been so difficult. Flutter lays a simple and easy way to start development and build your first app and so on. To install flutter on macOS, your system must meet the following requirements:

Get the Flutter SDK for macOS

You can access other release channels and older builds of Flutter SDK for macOS from here.

After setting up the path, run the flutter doctor command ($ flutter doctor) so that you can identify if anything is left to finish the setup.

The report mentions every missing dependency and gives you the solution. Install the missing dependencies and run the flutter doctor again to check if everything has been done perfectly. After all, you have to set up the platform. This includes iOS setup, Android setup, mac setup, and web set up. Head over to Flutter’s brief documentation about how to set up all platforms for macOS.

To install flutter on Linux, your development environment must meet the following requirements:

Get the Flutter SDK for Linux

You can install flutter on Linux in two ways.

If you don’t want to install a fixed version, get the source code from the Flutter repo on GitHub. Run the following command:

Pre-download the development binaries and run the following command:

Finally, you are now ready to run Flutter commands.

After doing all the steps mentioned above, run the flutter doctor command. This checks if there are any dependencies you need to complete the setup. Run the command $ flutter doctor (for verbose output, add the –v flag) to verify every installation dependency.

As for all other OS, your development environment must meet the minimum requirements. For Chrome OS, these are:

The library is libGLU.so.1 which is provided by mesa packages such as libglu1-mesa on Ubuntu/Debian.

Get the Flutter SDK

We hope you will find this guide useful for installing flutter on your operating system. Feel free to ask any questions or give suggestions if you want to. Just comment down below and our team member will get back to you for help.