Top 8 Flutter Tips and Tricks to Speed Up App Development 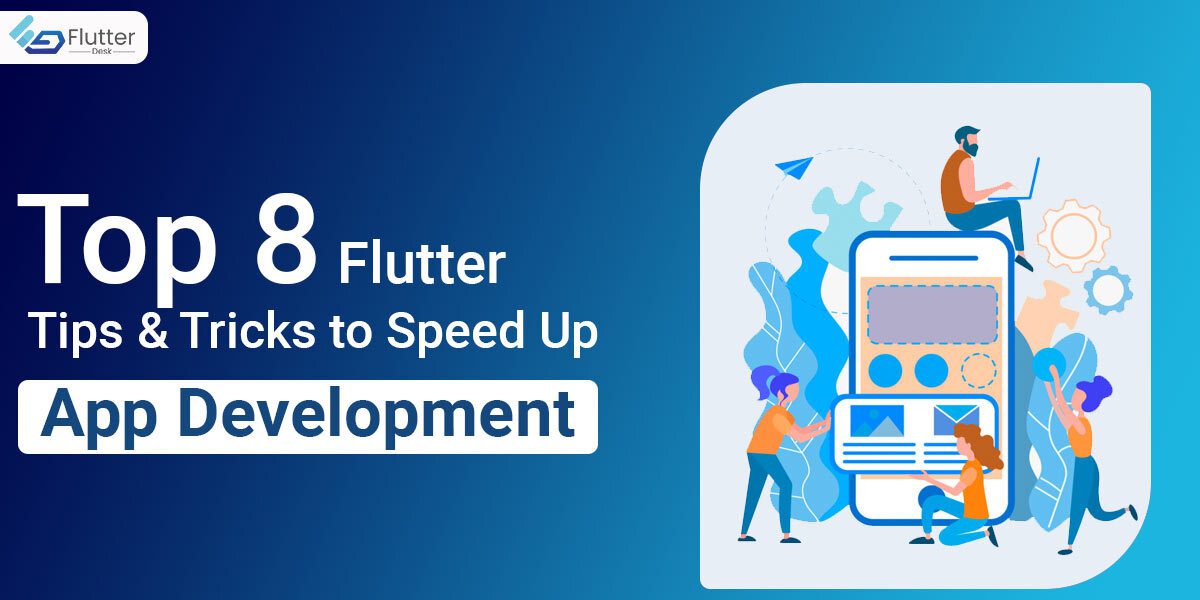 Flutter is one of the amazingly popular development frameworks that has changed the way of building apps. Its cross-platform development, single codebase system, native nature, reduced development cost, and increased time-to-market are a few pros of Flutter that make it a perfect platform for app development. Being a Flutter developer, you may come across newer strategies to implement within the development process. Flutter tips and tricks always turn out to be helpful for every developer to boost productivity. In this blog, we will be discussing some proven tips and tricks that you can implement and speed up the development process.

Mobile apps are generating massive revenues as well. According to the research, more than 613 billion U.S. dollars in revenue in 2025. Surprisingly, users downloaded 34.4 billion apps from Google Play Store and App Store collectively.

Let’s give you a sneak peek of some stats of Flutter.

In the second quarter of 2022, gross app revenue in the Google Play store amounted to almost 11 billion U.S. dollars worldwide. This was a small decrease compared to the previous quarter. The Apple App Store generated 21.9 billion U.S. dollars in consumer spending on in-app purchases, subscriptions, and premium apps in the most recently measured quarter.

Over the past couple of years, the demand for app development has increased drastically. Businesses are rushing toward going online as the potential of outshining your business online is much higher. All the fuss aside, today, we are going to have a futuristic approach to increasing productivity through different Flutter tips and tricks that our developers have leveraged throughout the development process.

It has been one of the keen concerns of every developer to choose which development framework to go with. Conversely, every next individual willing to have an app built for their businesses with even a little technical knowledge thinks about what platform to choose. So choosing a framework before stepping into the development right away is a good approach to avoid scope creep. This is because the choice of technology also plays a vital role in your app’s success.

Here are some pros of Flutter that make it a favorable technology stack for anyone to go with.

Apps that are built with the Flutter framework usually have high performance as compared to other frameworks. Its client-optimized language (Dart) enables fast, native, and predictable code which makes the Flutter app extremely fast. Interestingly, Flutter beat both Xamarin and React Native in terms of performance at the iOS Summit in 2017.

Flutter has another useful feature which is code reusability. Now you don’t need to write separate code for different platforms. You can readily use the code written for an Android app for an iOS app. Not only that but you can also use the same code for web or desktop apps. Build highly intuitive apps with Flutter with more ease in no time!

In app development, you need to develop an MVP first to validate your business idea. It’s better to have a minimum viable product (MVP) before launching a full-fledged app into the market directly. Flutter is the best platform for building MVP due to its scalability, lower cost of development, more time-to-market, etc.

Flutter has the most useful and interesting feature which is called hot reload. It streamlines the development process by suggesting changes and detecting errors in real-time. You don’t need to run the code every time to check if there is any error in the code.

There are countless Flutter best practices, tips, and tricks that you can perform to master Flutter app development. These can turn out to be helpful for many of you. Moreover, Flutter aspirants that are new to the Flutter game can definitely leverage these tips at its best.

As an app development project requires a dedicated team and resources to complete, you need to form an architecture too. This architecture will determine what will be its workflow for a particular project and how will you contribute to it. After sketching an architecture, get in touch with any senior software developer and ask him/her to review it. After their review, you should then save it as a document in your storage.

Having a proper architecture makes the development process transparent. This helps figure out the root cause of any dispute that may cause during the development. While if there isn’t any architecture written, we may waste hours figuring out any error in the code. Furthermore, you’ll have complete access to changing the content inside it. Mind that, every project has a specific niche and complexity level. So, you may not be able to apply the same architecture to several projects.

Flutter snippets help streamline and speed up the development process. It removes the boilerplate codes that associate with widgets. So, Awesome Flutter Snippets are a great source for every use case to improve productivity in app development. Flutter awesome snippets have more than 40 snippets for developers to use and excel at what they are doing. Some shortcuts are statelessW, statefulW, build, initS, dis, reassemble, didChangeD, didUpdateW, customClipper, customPainter, listViewB, listViewS, etc.

You will likely encounter some errors while coding any app. Sometimes, errors have long descriptions and you cannot display them on the console. Instead of ignoring it, you can easily display the whole error with log(message).

When we create a project in Flutter, there are too many files in it by default. No doubt, they are necessary for the project to run but they form a cluster alongside your project. So you need to structure those files in a way that they don’t create a mess around. In that case, we can organize these files simply in VSCode.

Do these steps to structure the files properly:

You will see that all the files will be arranged properly. Interestingly, the files which you rarely use will be hidden. Don’t worry, you can still access those files using the expanding option.

5. Use SafeArea to Avoid Phone Notch

You may have seen a display-cutting screen while using an app. This happens mostly with notch display phones. Sometimes, developers miss out on creating a full-fledged display that results in a bad user experience. This issue can occur on both Android and iOS devices. So, to avoid this, you can use the SafeArea widget to avoid such intrusions.

It checks the dimensions of the screen using MediaQuery and pads its child Widget to match that screen. So it makes sure that your app’s UI is safe on both iOS and Android.

6. Use Extension to avoid duplicates

While building an app, try to avoid writing similar code again and again. Suppose you need to show the HTML tags on the UI by transforming it, Flutter will continue to not support HTML tags fully. In this case, you will need to build the same code in a few places. And the extension method will be helpful here. Thus, you can make it possible to utilize everywhere required.

When coding, you will come across several conditions where you’ll need to add classes for two or more features on the same screen. Why not add two small classes for each feature on the page rather than adding a long separate class? There is nothing wrong with adding one large class but it will make it easier to understand, fix bugs, and increase readability as well.

Mind that, using classes within the apps can have different scenarios. You’ll still need to use basic logic to keep in mind and add them accordingly.

After going through all the Flutter tips and tricks, we hope these will turn out to be helpful to you. As we mentioned at the start, these aren’t the pro tips but these can definitely help you scale your productivity during Flutter app development. We wish every Flutter developer should know these Flutter tips and tricks. Share your thoughts in the comments 😉

If you’re looking for a reputable Flutter mobile, web, or desktop app development company, FlutterDesk is the right place to get the development done. Get in touch and let’s build intuitive apps today!