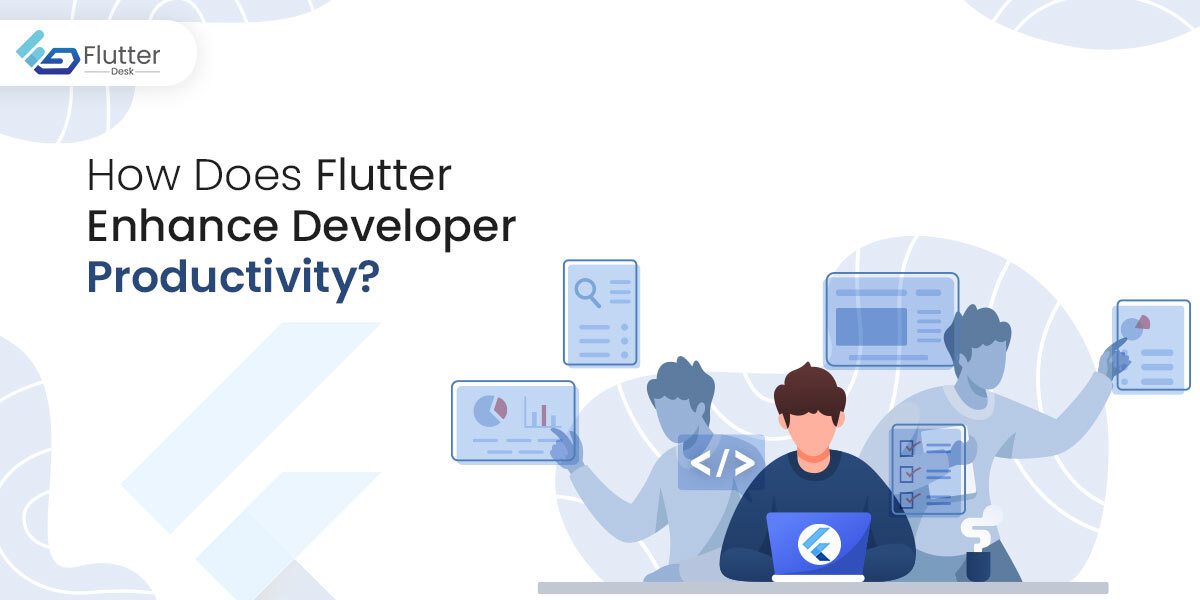 How Does Flutter Enhance Developer Productivity?

Flutter is an open-source app development platform launched by Google. Developers of all levels of expertise and experience use it. But can Flutter enhance developer productivity?

Additionally, developers benefit from incredible community support and documentation that makes app development easier. Overall, the applications are developed very quickly, which could boost productivity in general. As a result, the majority of developers are shifting to Flutter technology.

What Does Developer Productivity Mean?

It measures how productive a developer is over a given period. Things like code lines or commits can determine developer productivity. It can also be based on other criteria.

Organizations determine their goals. Keeping track of the developers’ performance helps them achieve these objectives in time. It is important to measure the developer’s productivity based on what they accomplish in terms of tasks, projects, and goals.

The productivity of Flutter developers is crucial to the performance of any company. Increasing the developer’s efficiency will result in the completion of more projects.

The performance of developers cannot be measured solely by a few factors and will not provide the full picture. Additionally, it would help if you determined whether the developer’s unproductivity is entirely his fault or a consequence of the company’s environment.

This brings us to the appropriate methods used to measure Flutter developer activities accurately.

How to Measure Flutter Developer Productivity?

Listed below are some common developer productivity metrics which should be kept in mind while accessing dev performance.

Developers’ satisfaction is one of the most important indicators of productivity and engagement at work. It predicts how satisfied developers are with their jobs, environment, team, tools, or salaries.

A Flutter developer may perform several tasks during app development. As a result, it is difficult to measure developer productivity.

However, a proper engineering system can assist in measuring developer efficacy. As a starting point, here are some developer activities that you easy to quantify:

When it comes to success and collaboration, teams must be transparent about their members’ activities and tasks.

The whole process of development depends on how the flow of information is managed within and between teams. The more diverse and inclusive teams tend to perform better.

Here’s how you can quantify communication and collaboration:

A significant benefit of the Flutter platform is its ability to be written once and used anywhere. Additionally, it has solved the problem of maintaining consistency across various platforms.

A single codebase is functional on Android, iOS, and Web-based devices. It makes the app development process faster, simpler, and cost-effective.

Flutter compiles its code into native ARM machine code, which is pretty fast and has excellent performance. It is specifically designed for the Dart compiler. For C++ and C code, it uses Android’s NDK.

Additionally, with the introduction of Flutter 3.0, desktop apps for macOS with Intel and the latest Apple silicon processors are now created as universal binaries. Having executable codes for both these architectures, these apps run natively.

The Flutter framework is open-source, which means you can access its original codebase. The Flutter community can benefit from your contributions, issues, and help. In the field of software development, the open-source community has been responsible for some of the greatest advancements.

Flutter provides an efficient environment for developing cross-platform apps. A built-in widget simplifies the process of developing, testing, and fixing apps. The Flutter framework is ideal for prototyping and developing MVPs quickly.

Additionally, Flutter questions on Stack Overflow in 2020 exceeded those on React Native. This means more new developers are choosing this platform for app development.

Developer productivity is boosted by the large community of developers Flutter attracts on various platforms that are incredibly responsive to queries.

Flutter is largely a widget-based framework, similar to React, where everything from the layout to change colors to text functions as a widget. In this way, Flutter offers a wide array of customizable widgets. It is possible to increase the performance of the app and developer productivity with so many customizable widgets available.

Developers can easily build Flutter apps with the help of Flutter documentation, which is well-organized and well-formatted. Whether you are a novice or a pro developer, you can enhance your development skills by learning from this free, authentic resource.

Web and desktop support is available in Flutter 3.0. This allows developers to build not only for mobile but also for the web from a single codebase.

Having web support allows you to reach a wider audience of users. The desktop application now runs on Linux and macOS, thanks to version 3.0 of Flutter.

Additionally, a number of accessibility features have been added to Flutter 3.0, including a screen recorder, sufficient contrast, and larger font sizes for desktop versions of Windows, macOS, and Linux.

Dart is a programming language that is optimized for client-side development on any platform. Since Flutter is built using Dart, you only need to be familiar with Dart if you plan on developing apps with it.

This is why Dart is so incredible: it’s an object-oriented, strongly typed language that guarantees null safety. With these amazing features, Flutter developers can be more productive when working with Dart.

Additionally, AOT and JIT compilations are supported by the Dart language. A hot reload is possible due to JIT’s ability to compile the app code while it’s running, allowing a change to be made immediately. Further, the AOT compiler handles compiling code to native ARM machine code, which makes Flutter very fast.

Flutter DevTools allow developers to easily reload, format, inspect, and debug their apps, increasing their productivity and performance. By using the widget inspector, you can navigate between pixels and widget trees, as well as lines of code.

What is a custom widget in Flutter?

You could use a widget from pub.dev or build one yourself. Adding widgets to your project is easy with a custom widget editor. UI editor lets you write, modify, or upload widget code directly. It allows you to define parameters that can be used to customize the widget.

Are Flutter apps faster to develop than their competitors?

With Flutter, you can develop applications faster than with its competitors. A Flutter app is typically developed in half the time it would take to develop a similar app separately on iOS and Android.

Since Google launched Flutter, it has been gaining popularity among developers. Even though it started as a toolkit for cross-platform app development, Flutter has now evolved into an all-in-one platform for developing Android, iOS, web, and desktop applications.

Flutter boosts the development process because it compiles the code into machine code. Also, the developer productivity increases with stateful hot reload, and dynamically loading experiences are now available for web and desktop.

Finally, a single codebase allows you to maintain consistency across Android, iOS, and the web. If you have a business idea you want to implement, you can hire Flutter developers for cross-platform app development at an affordable price.